I mentioned to my dad as we were leaving home today that I'd like to find a Pec Sand in the area as there had been quite a few reports from other counties recently, although didn't actually have very much hope...

Our first stop was Hauxley where a few hours produced a good count of at least 108 Black-tailed Godwits, as well as 2 Ruff, a Common Sandpiper and a Knot among the more usual waders. The Estuary at Amble held 77 Black-tailed Godwits which included a lot more adults than at Hauxley, so it is possible that there are some very large numbers in the area. One was colour-ringed, and a Kingfisher and 6 Goosanders gave good views, while the injured Whooper Swan was visible towards Warkworth.

Next we headed to Druridge Pools and were pleased to see our first juvenile Curlew Sandpiper of the year when we arrived, as well as a Greenshank, 5 Ruff and 30+ Dunlin. We walked around to the south facing hide and gave it about twenty minutes. We were just getting ready to move on when I decided to have a last scan of the far edge looking back towards the screen.

I noticed a bird feeding alongside a Redshank which I thought looked interesting - it was slightly larger than a Dunlin with quite a pot-bellied look and I thought I could see a sharply defined dark chest - although the views were very distant, which combined with the heat haze to make confirming it impossible. I headed back down the path to view from the NE corner but there was no sign.

On reaching the screen again I set the scope and started scanning the Dunlin and was pleased to see a really smart juvenile Pectoral Sandpiper feeding among them. I then realised the bird stood next to it was another Pec Sand! The first time I've seen more than one together, and a very welcome set of bonus points for Patchwork Challenge!

Cresswell was quieter with 8 Black-tailed Godwits, 2 Little Egrets and a Yellow Wagtail.

Pectoral Sandpipers - video should be viewed in HD at 720p/1080p 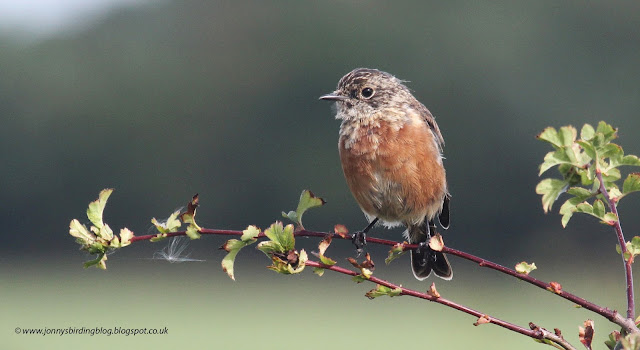 I had just arrived home from a checkup at the dentist this afternoon when I checked my phone and saw that a Cory's Shearwater had been seen passing Whitburn. However the report was from ten minutes ago, so we wavered slightly before deciding to try Newbiggin anyway.

Within five minutes we were in the car and fifteen minutes later we arrived in the car park. Having been stopped by four of the five sets of traffic lights on the way, we were worried that we'd be too late...

After legging it from the car park to the point, we just had time to set our scopes up before the other birder already there called that he had the bird. At around just a couple of hundred metres range the Cory's Shearwater was close enough to be picked up with the naked eye and getting the scopes on it was easy!

We were treated to some really good views of the bird and were able to pick up all the key features such as the yellowish bill, upper and under part patterns, and the small pale patch on the uppertail as well as the overall grey colouration.

I tried taking a short video of the Shearwater which can be found below. While it is possible to see what it is from the video, it doesn't do the views justice, and it looked a lot better through the scope. At least taking it was a bit of practice for when the albatross decides to return to our part of the North Sea...
Also, in the seconds before the Cory's was called, I picked up an adult Pomarine Skua sat on the sea which had disappeared by the time the Shearwater had passed. It was a somewhat overshadowed by the Cory's and I even forgot to mention it in the original version of my post!

Video should be viewed in HD at 1080p

And a few badly edited videograbs... 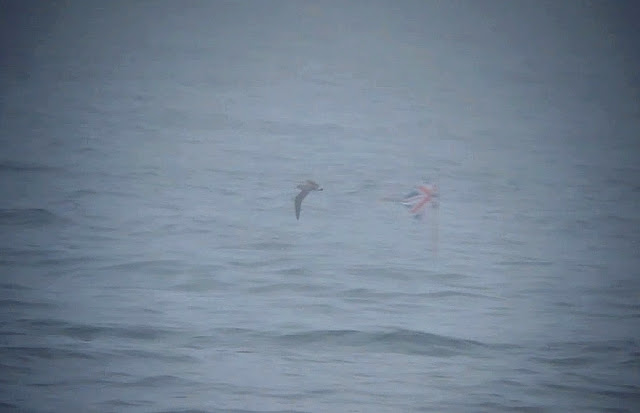 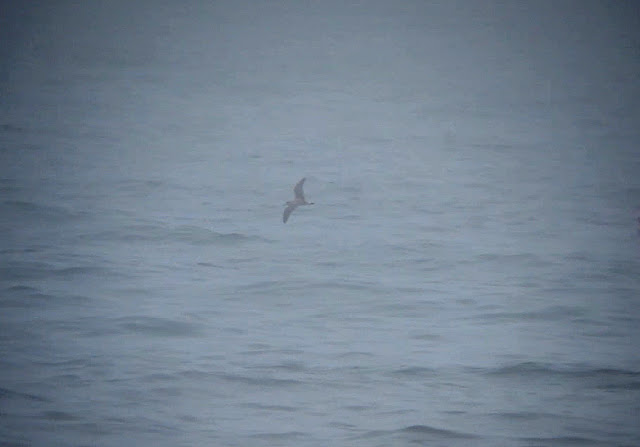 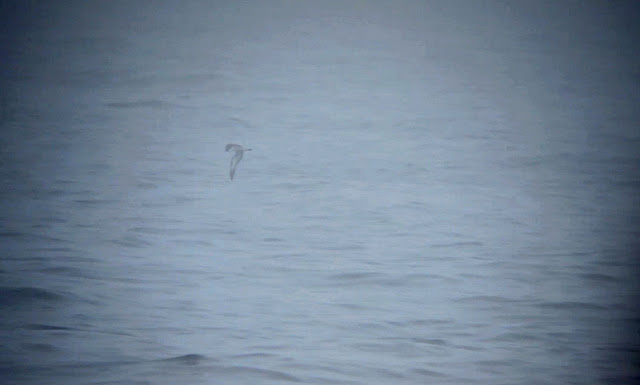 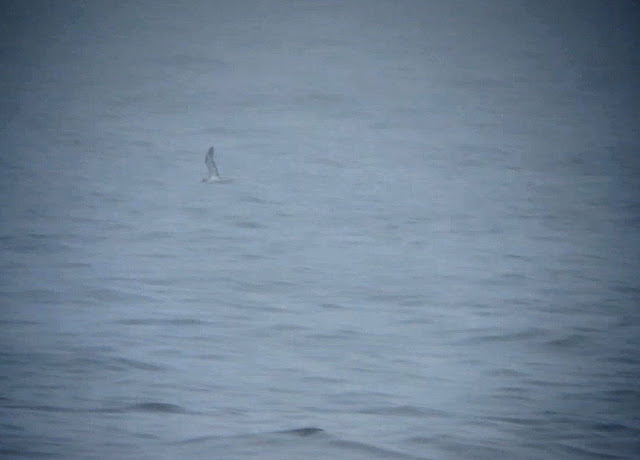 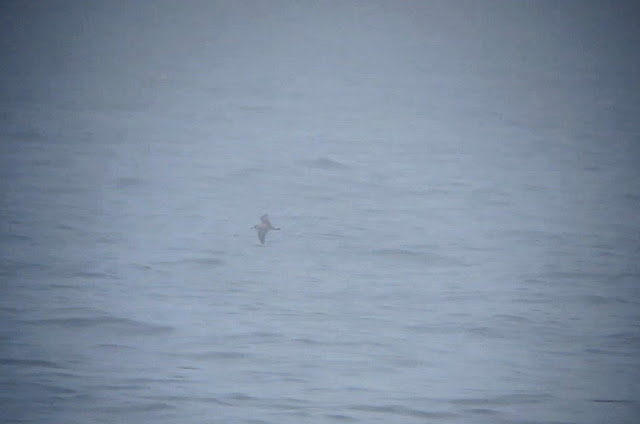 After dipping it last night we were really pleased to get some good views of the Spotted Crake at Druridge Pools this morning. It takes me to within just one point of my final Patchwork Challenge score from last year...

Other birds at Druridge Pools recently have included the White-rumped Sandpiper (until a couple of days ago), Green Sandpiper, 90+ Black-tailed Godwits, a few Ruff and lots of Dunlin. 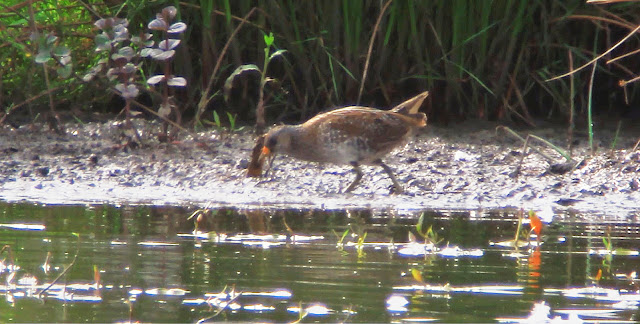 We've had a couple of mornings out since returning from the Outer Hebrides. This morning a seawatch at Newbiggin was quiet with the highlights being a group of three Velvet Scoters and a dozen Manx Shearwaters.

On our way to Druridge Pools, a stop at the north end of Cresswell produced the adult White-rumped Sandpiper on the beach opposite. Upon reaching the Budge Fields, the number of Black-tailed Godwits had increased to 56.

There was a greater variety here on Monday, including a Spotted Redshank, 3 Green Sandpipers, a Wood Sandpiper and a juvenile Garganey.

Finally, at Hadston it felt a bit like autumn with a Redstart among a few phylloscs and Robins flitting around the hawthorns... 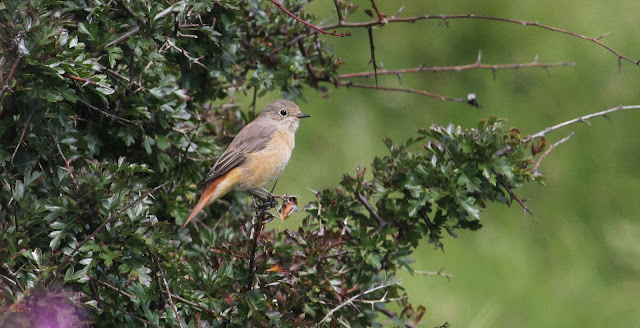 Birding at its best - White-rumped Sand on North Uist

Last Wednesday we spent the day at RSPB Balnarald on North Uist. We were nearing the car so I decided to have a last go at photographing the waders on the beach. I see one quite close to me and got a bit of a surprise to see an adult White-rumped Sandpiper just a few metres away from me... 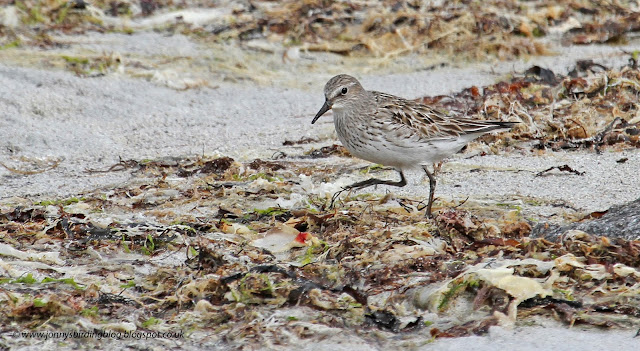 Over the next hour we were treated to some amazing views of the bird as it completely ignored us and fed at just a few metres range. We were expecting it to be the same bird as seen on a different part of the island three days ago, but comparing photos proved them to be different birds, with ours having very few obvious dark chevrons on the flanks and much less dark feathering on the upperparts. It was great to find a good bird and then get such good views of it; birding at its best! 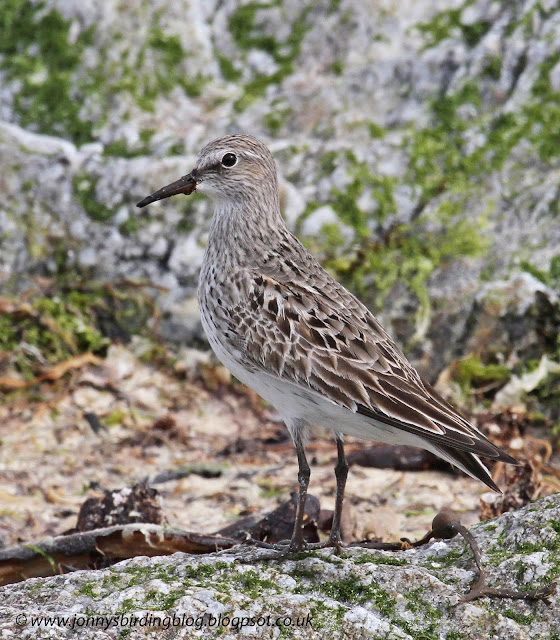 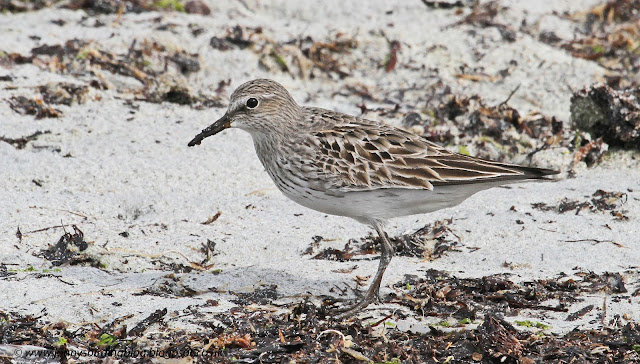 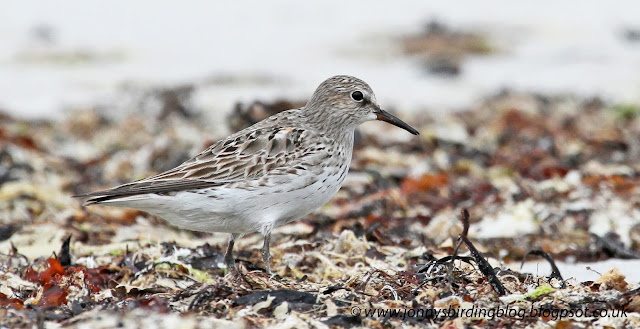 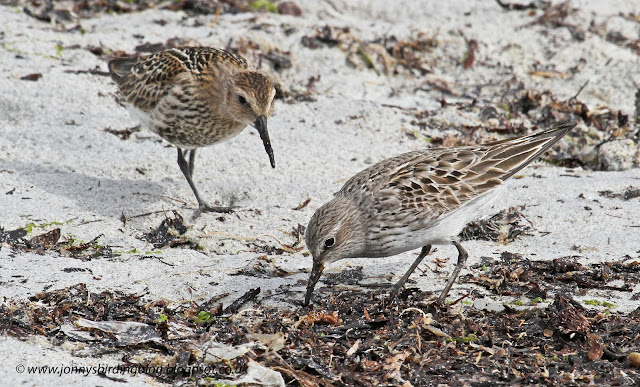 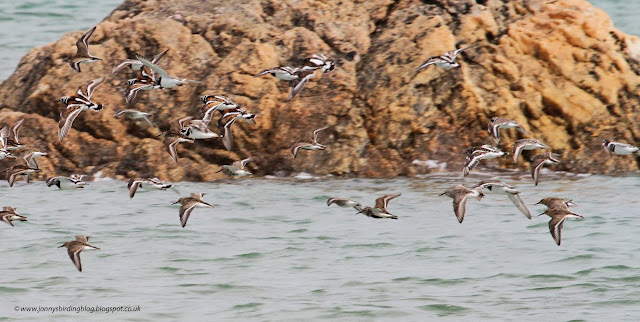 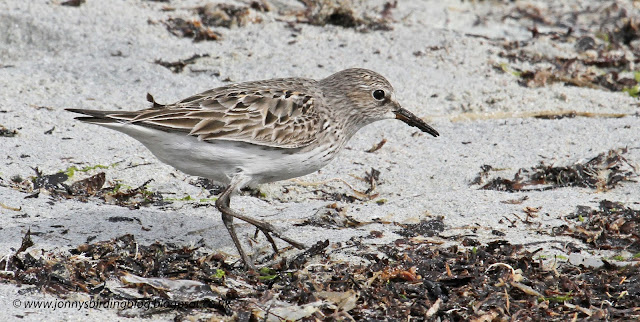 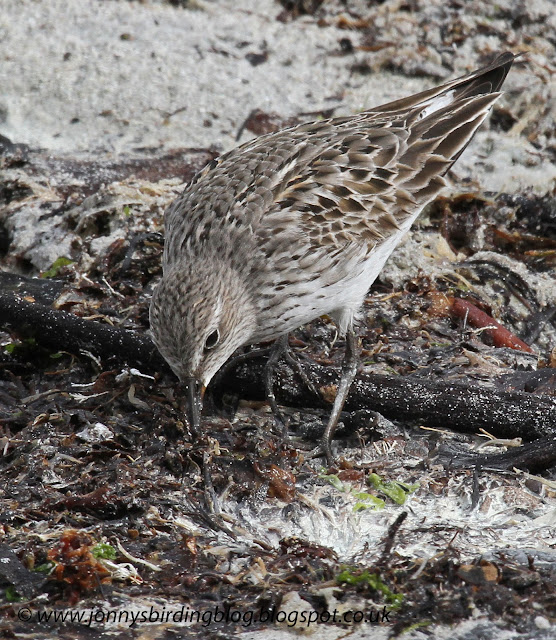 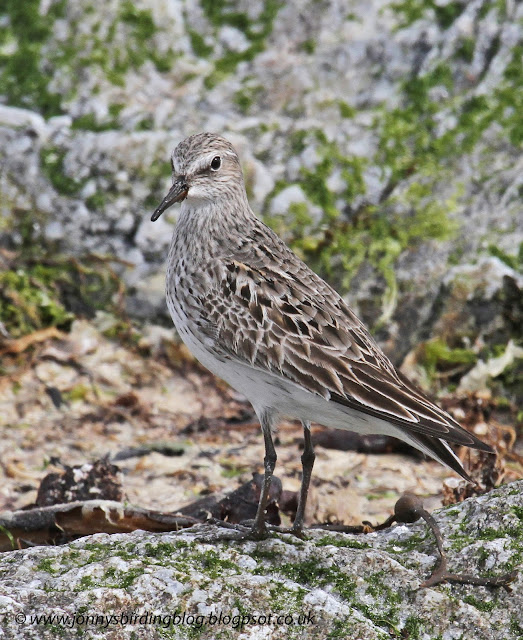 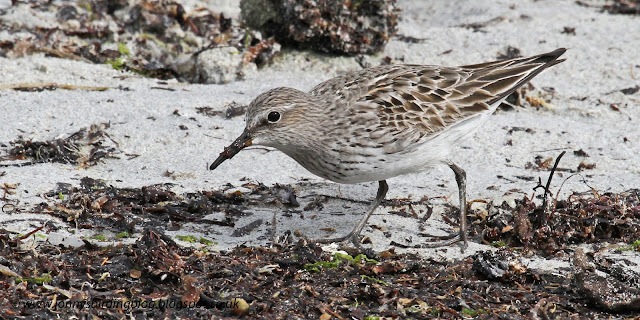 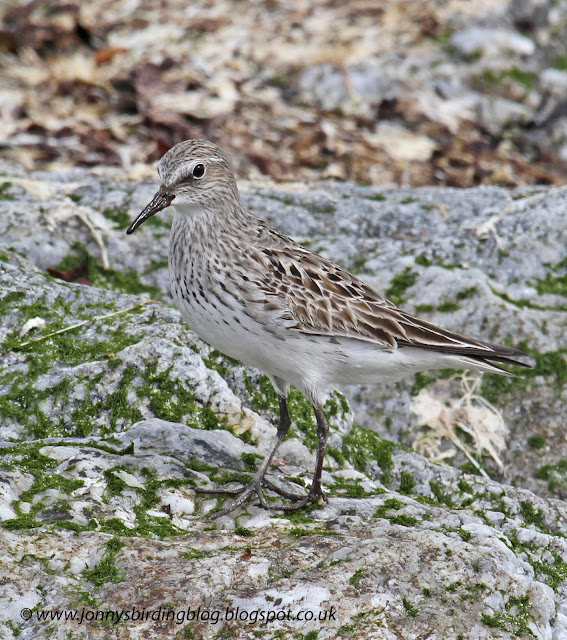 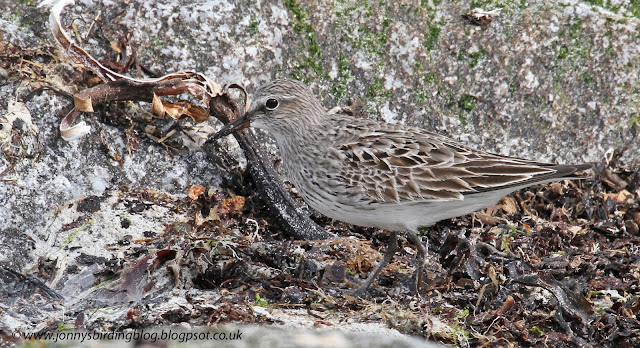 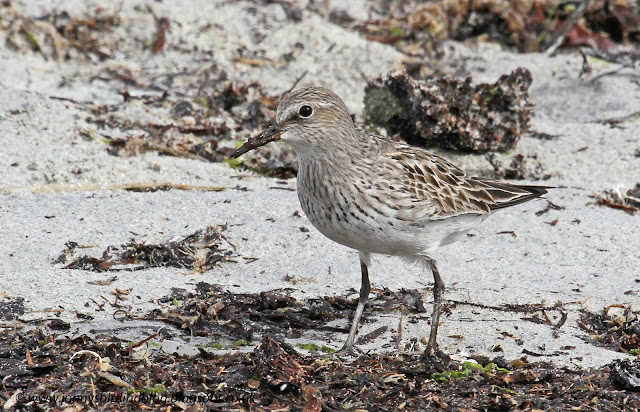 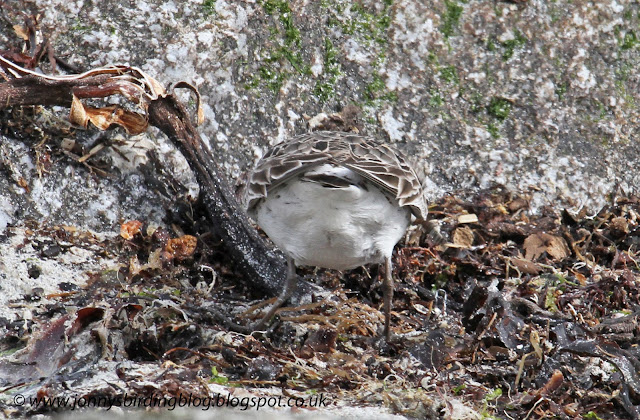