Yesterday we were at another university open day - this time in Edinburgh - and the fact we drove there meant that we could do some birding afterwards...

Musselburgh was our first port of call as we hoped to improve on our views of the White-winged Scoter from the spring. When we first arrived it wasn't looking great as no one on site had seen it, despite good conditions, though I did pick up a Red-necked Grebe in one of the Velvet flocks. We walked further east along the sea wall and eventually my dad located the drake American White-winged Scoter among some more Velvets. We watched the bird for quite a while, and it came closer and closer as time went on. By the time we left we had had some really good scope views.

We also estimated that there were 100+ Velvet Scoters offshore, as well as similar numbers of Red-breasted Mergansers including one very large group, and a single Arctic Skua flew west.

After finishing at Musselburgh we drove a short distance south down the A1 and arrived at Barns Ness. As we were driving down the approach road we saw a couple of birders scoping White Sands Quarry from the north side so joined them and were soon were onto the Buff-breasted Sandpiper on the south shore. The views were very distant but still distinctive.

The light was starting to go now, but we continued down towards the lighthouse and joined a small crowd admiring the first-winter Woodchat Shrike. It wasn't doing much this late on in the day, but at one point it did fly round and land right in front of me and my dad. A nice way to round off an excellent afternoon! 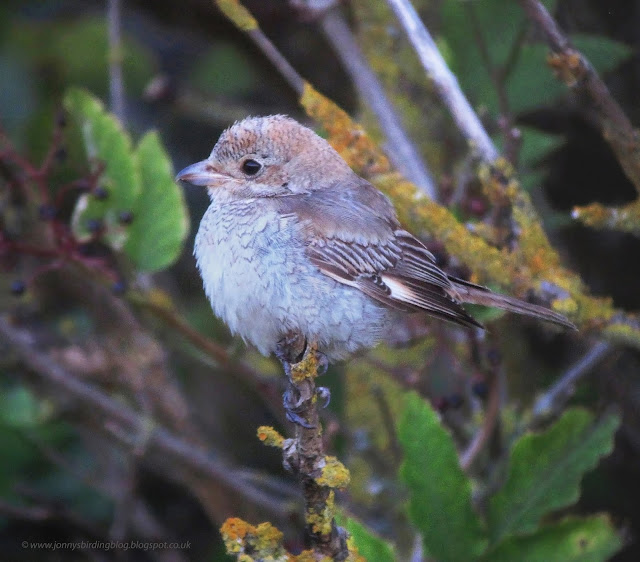 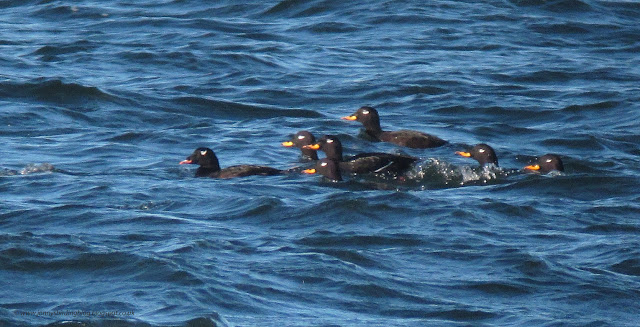 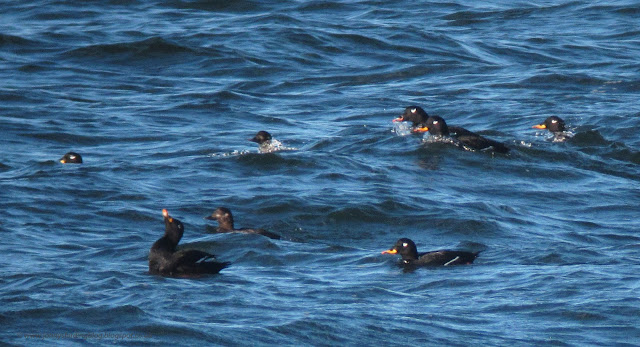 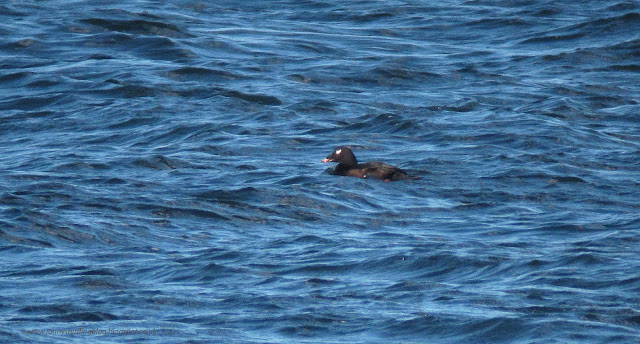 American White-winged Scoter with Velvet Scoters - video should be viewed at 1080p
Posted by Jonathan F at 20:32 No comments:

Last weekend we visited a UEA open day, and stayed overnight in Kings Lynn. This allowed us to do a bit of birding the evening after at Titchwell as well as stopping at Frampton on the way home... 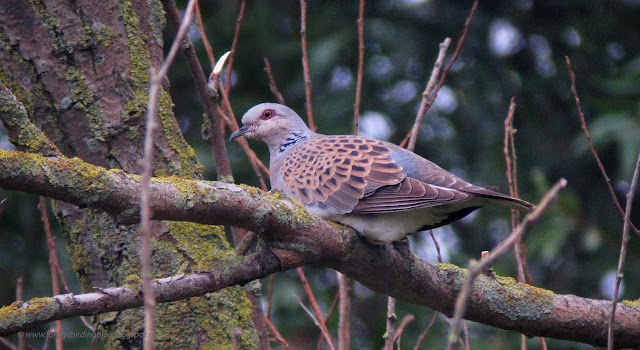 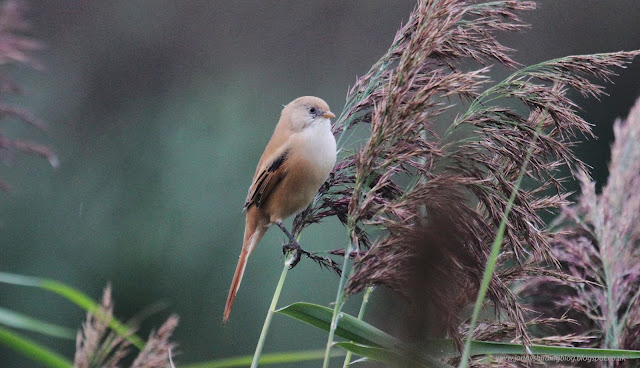 A stop at RSPB Frampton on the way back on Sunday morning was also very enjoyable with highlights including the Long-billed Dowitcher, 16 Spotted Redshanks, Curlew Sandpiper, Spoonbill, Black-necked Grebe and an impressive 1500+ Black-tailed Godwits. 3 Willow Emerald Damselfly were an odonata tick for me. 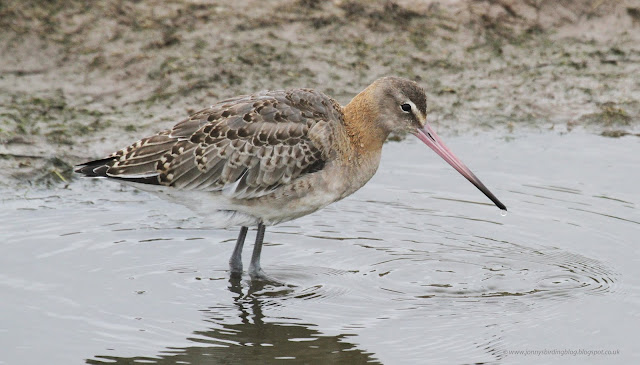 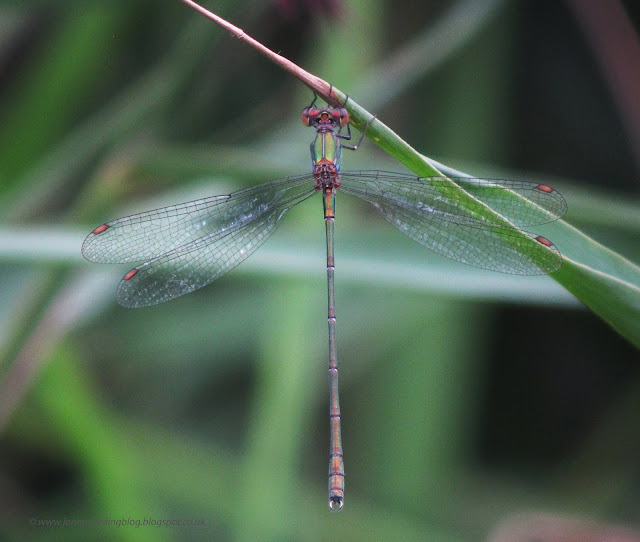 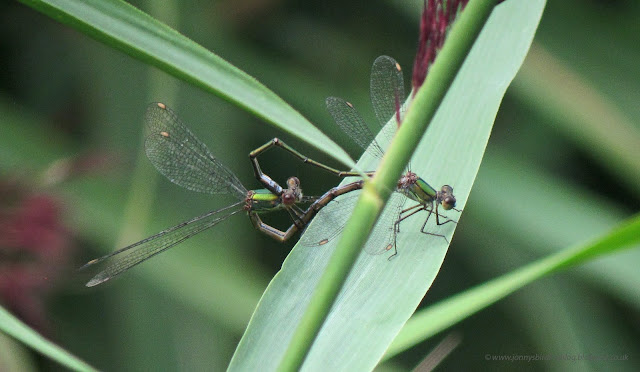 Yesterday afternoon I had the opportunity to call into St. Mary's Island for a look at the two Barred Warblers which had been found there. They showed well, regularly perching in the open on the wetland's brambles and providing me with great scope views. Much better than the video below suggests...

We were just getting ready to head out this morning when news came on of a Greenish Warbler at Chevington. We quickened the pace, although when we arrived the dreaded no sign message came on.

We continued around to the bushes behind the L-shaped hide and it was obvious how difficult it would be to see the bird given the thick vegetation. An hour later we had seen nothing more than a couple of Willow Warblers, but thankfully a slight movement at the back of the bushes proved to be the Greenish Warbler. While not a long view, I was lucky to get a look at the bird as it sat side on in the open. A very welcome patch tick!

A short while later a flock of Long-tailed Tits moved through the same bushes, and a vocal Willow Tit was with them. At the north pool a juvenile Curlew Sandpiper had arrived, along with 3 Pintail, and the 2 Garganey were still around. Another Garganey was at a Bothal Pond on the way home.

For a photo of the Greenish, check out finder Dave Elliot's blog here.