In between increasing amounts of schoolwork and editing photos from Fuerteventura, we have managed a few visits to the patch. Back at the beginning of March it was extremely quiet, except for a drake Green-winged Teal at Druridge Pools.

Last weekend things were slowly starting to pick up with a first-winter Glaucous Gull north through Druridge Pools being the highlight. An Egyptian Goose was also near Linton Pond.

Today, we headed out hoping to get some hirundines in the deteriorating weather conditions and East Chevington we were a bit surprised not to find any. However, at Druridge Bay Country Park there were at least 60 Sand Martin.

Another 10 Sand Martin were at Druridge Pools and we walked along the coal road to find the adult Bewick's Swan still among 62 Whoopers. As we watched the swan, we picked up a Great White Egret flying towards us from the west and it appeared to land on the shore of the main pool. We rushed back to the hide and at first there was no sign, but my dad picked it up in the SW corner. Unfortunately the views were pretty poor but it was nice to finally find one for ourselves!

A Velvet Scoter and Sandwich Tern were offshore.

In order to get my Fuerteventura photos onto my blog a bit quicker, I'm going to post a number of species posts about individual species from the last few days of our holiday in February.

Here's the first set, featuring photos of a showy group of 15+ Pallid Swifts over Las Parcelas, near Los Molinos Reservoir... 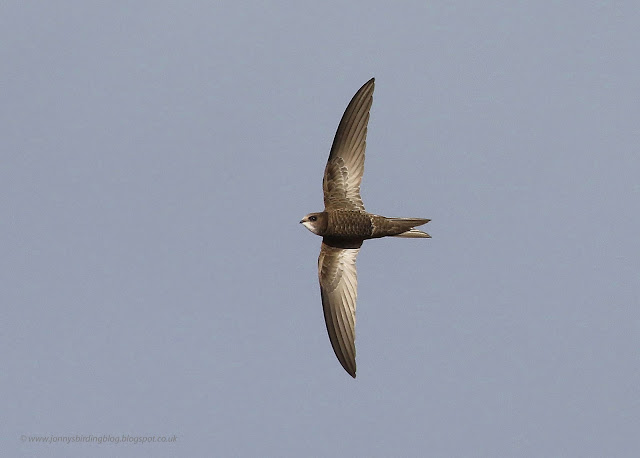 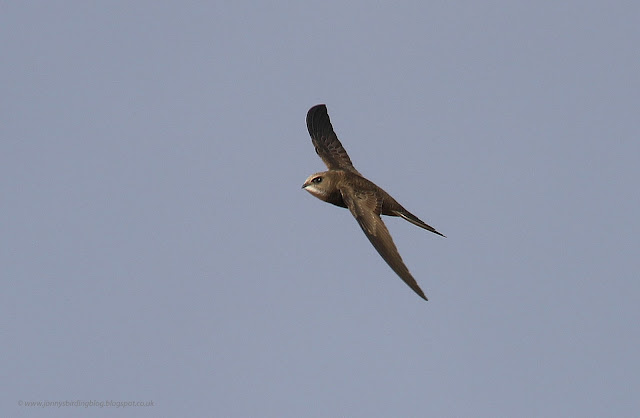 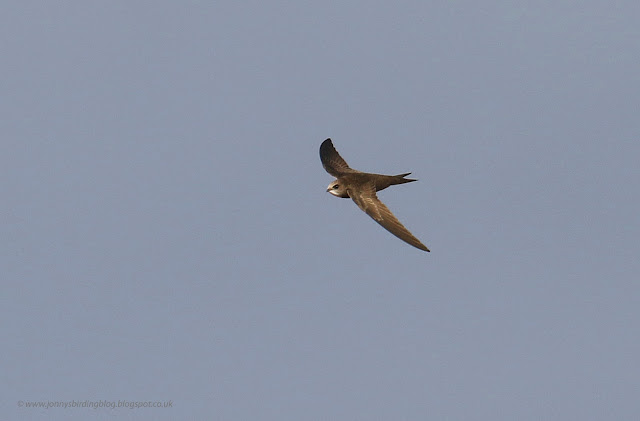 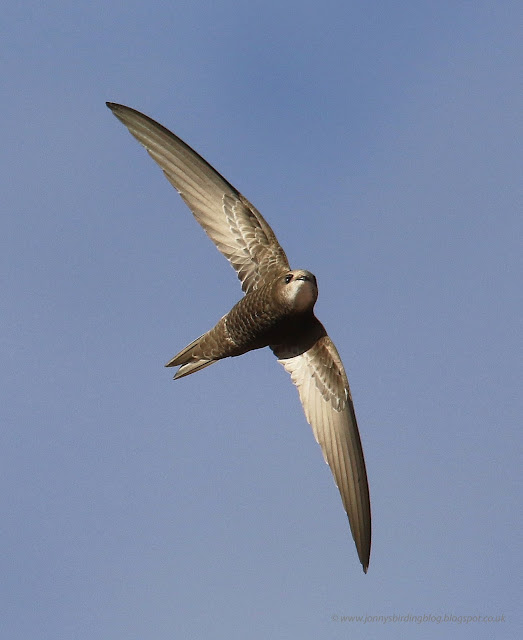 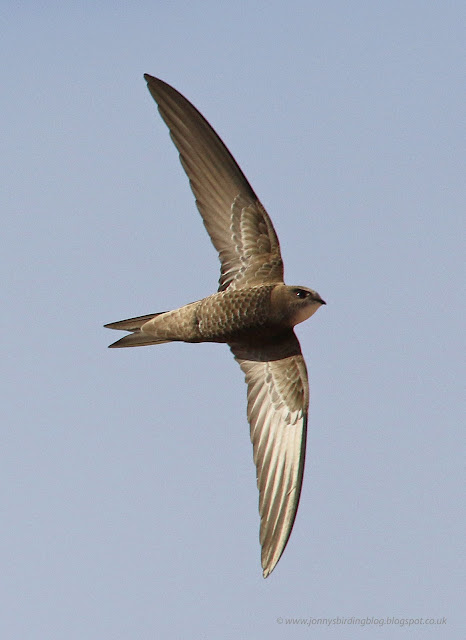 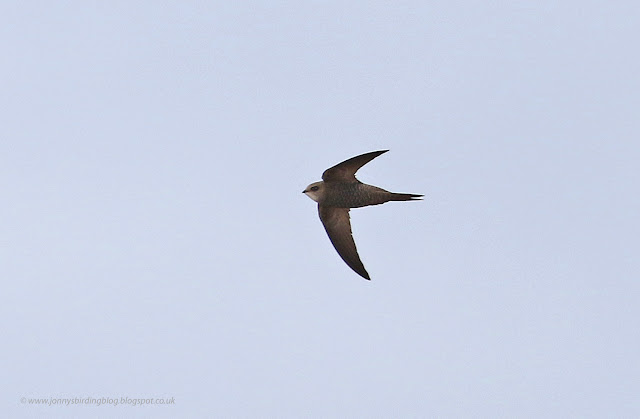 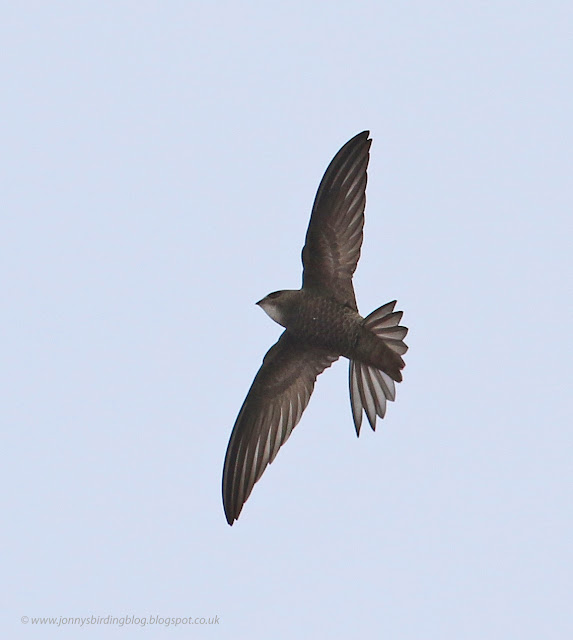 After a busy first few days to our trip, we fancied our fourth day being a bit more relaxed. We spent the morning at Faro de Toston just north of our apartment in El Cotillo.

It was the most productive site for waders we visited during the week, with over 60 Ringed Plover and 20 Kentish Plover on the various small beaches. Other waders were 3 Whimbrel, a Grey Plover, 2 Turnstone, 5 Common Sandpiper and 3 Dunlin. Some showy Berthelot's Pipits were around the point, along with 2 Trumpeter Finches and 4 Sandwich Terns.

For the afternoon we drove to the Fimapaire Valley, just east of La Oliva. We didn't expect very much here but had a nice surprise when I found a Yellow-browed Warbler in a small patch of willows in the west end of the valley. A flock of 40+ Spanish Sparrows and several Hoopoes were also in the willows.

The valley was good for Laughing Doves with several flying around the various goat farms. Southern Grey Shrikes were easy to see and flyovers included an Egyptian Vulture, Ruddy Shelduck and a group of 11 Pallid Swifts. 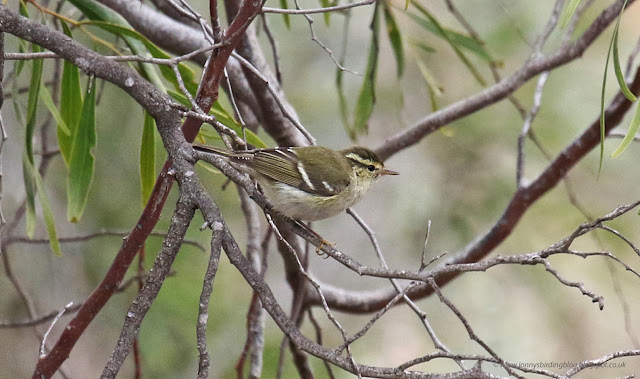 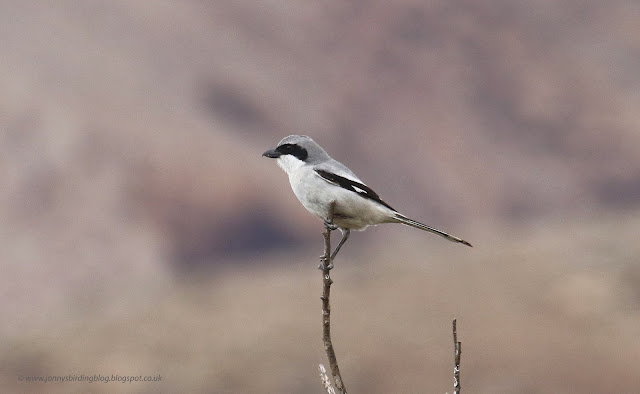 On our third day on Fuerteventura we made the short journey south from El Cotillo to Tindaya Plains. This is possibly the best site on the island to catch up with the desert specialities, and on our first visit we definitely were not disappointed.

The key to viewing at this location is to slowly drive along the tracks in the car, scanning every so often. The birds can then often be seen at close quarters from the car. Once we arrived it wasn't long until we spotted a pair of Stone-curlews sat just metres from the track. They were totally unfazed by us despite the incredibly close range. We were treated to our best views of the species by a long way!

We continued west along the main track, and quickly picked up a group of four Houbara Bustards. One female cam particularly close. Berthelot's Pipits and Lesser Short-toed Larks were both present in good numbers across the plains.

We reached a crossroads, and here we located a loose group of very smart Cream-coloured Coursers numbering six in total, including two juveniles. This was also a particularly good place to see Lesser Short-toed Larks.

The track continues all the way down to the coast (although deteriorates and is almost impassible in places) and we decided to drive down its full length. We saw a total of five more Houbara Bustards including one which flew past the car and another which just sat preening close by. Our first two Black-bellied Sandgrouse of the trip flew over too along with a Ruddy Shelduck.

On reaching the end of the road, we had a look offshore where around ten Cory's Shearwaters were milling around and nineteen Gannets flew past north. A Barbary Falcon flew over our heads here.

Encouraged by our success here, we decided to head back to Barranco de Rio Cabras for another go at seeing the Dwarf Bittern. Again there was no sign, but I did find a Spotted Crake under the tamarisks and a Greenshank was also new, along with most of the birds on my previous post. 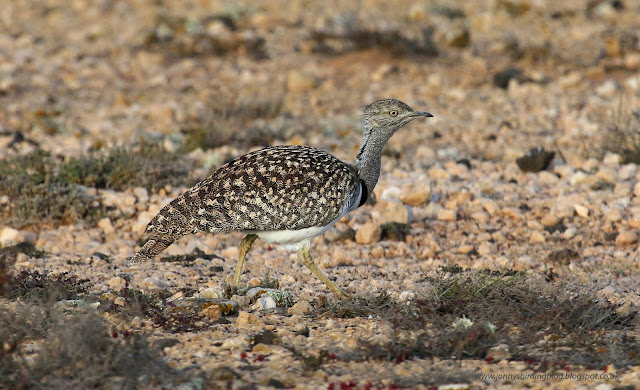 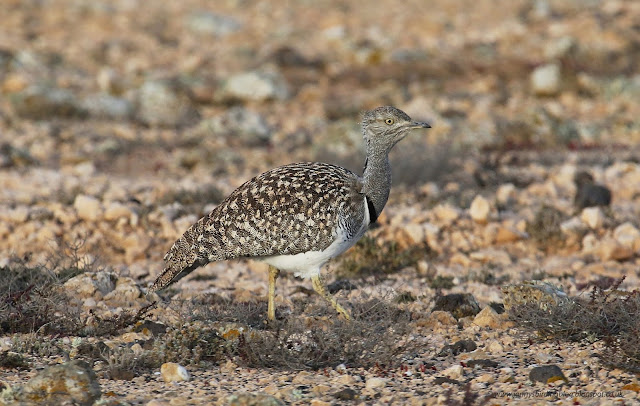 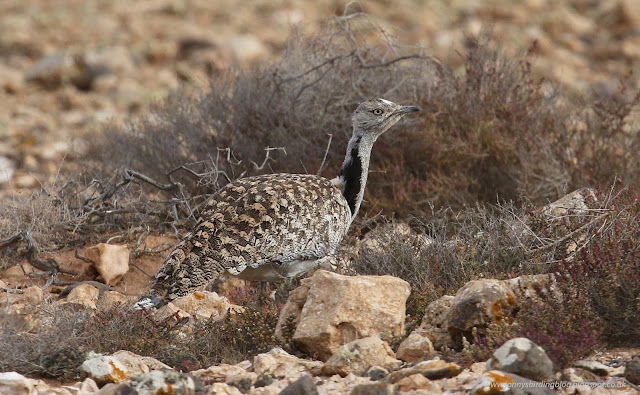 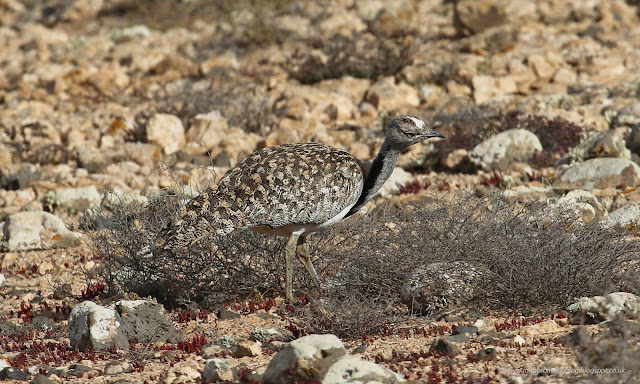 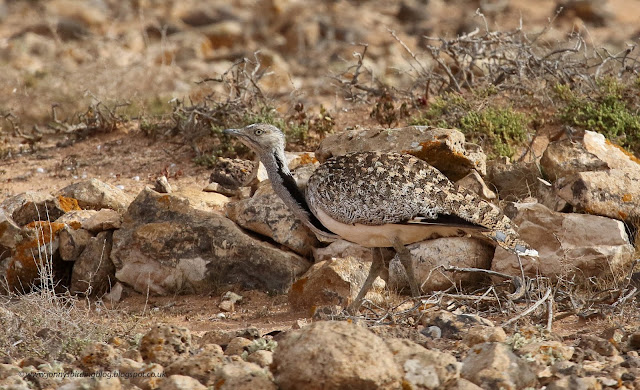 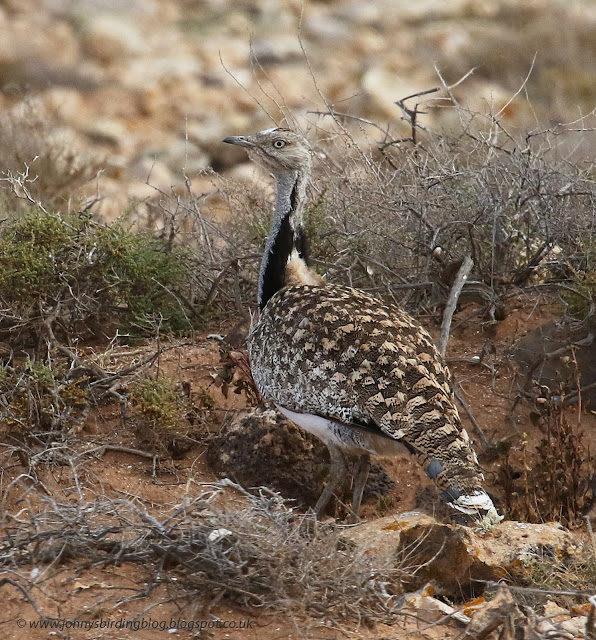 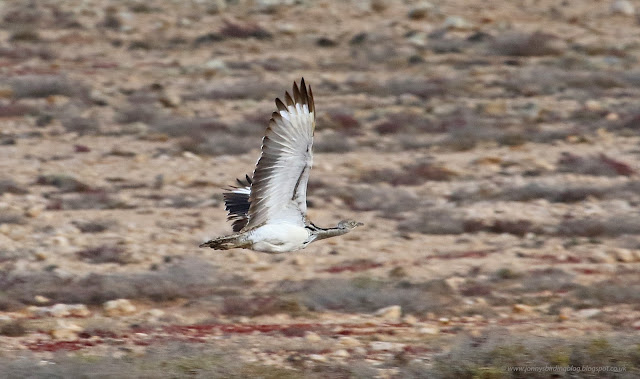 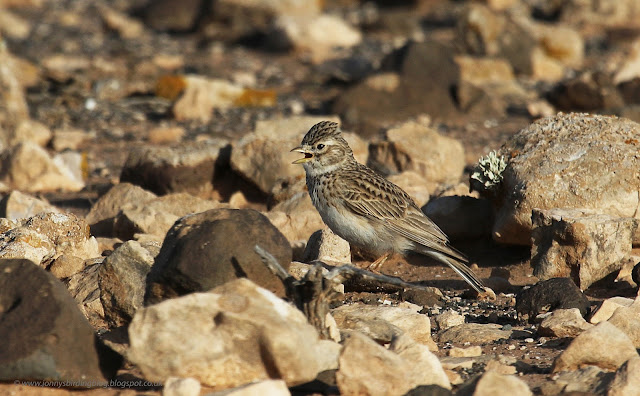 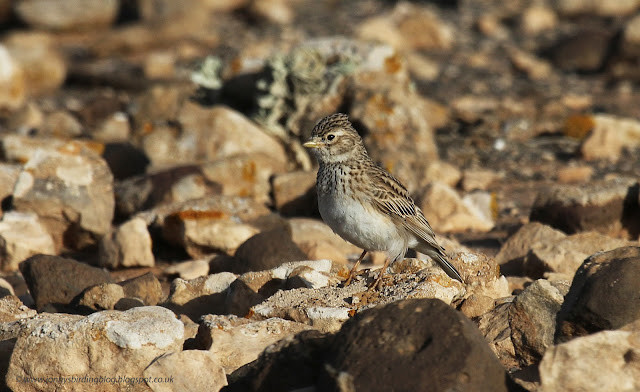 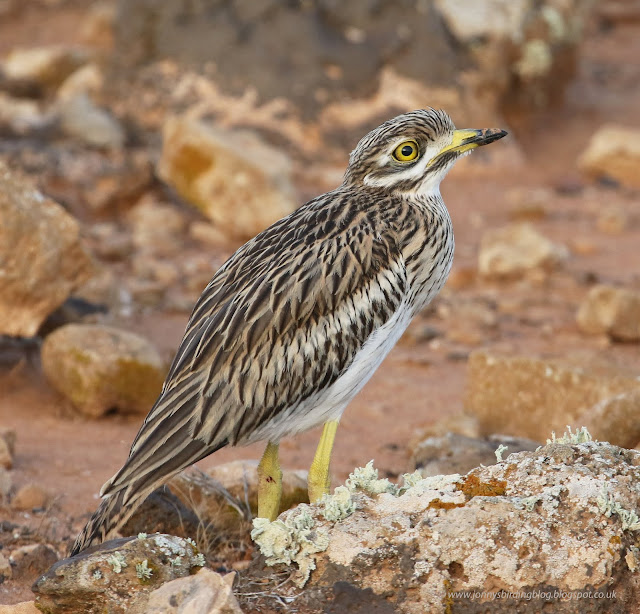 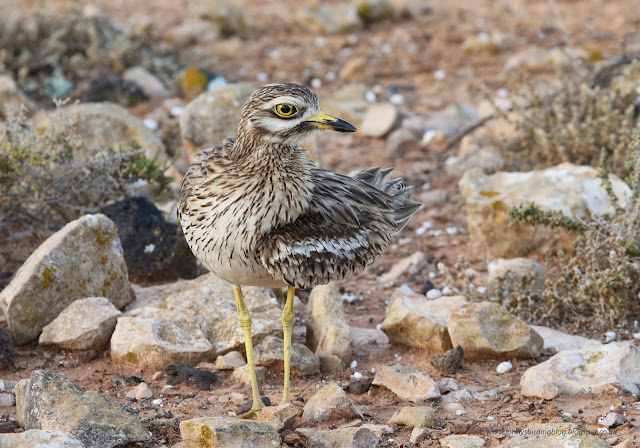 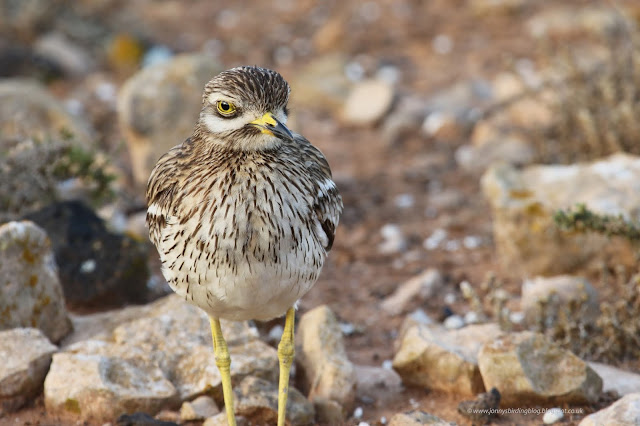 The week before last, me and my dad headed south to have a week's birding on the island of Fuerteventura. We had a superb week, managing to catch up with all of our targets, often getting fantastic views too. I am slowly going through my photos, and over the next few weeks I will be putting them on my blog along with a brief account of the days birding...

We flew out on Saturday the 16th of February and arrived early afternoon. After picking up a hire car, we drove to the town of El Cotillo which would be our base for the week. This drive did prove productive and our first tick come almost immediately with a couple of Plain Swift nicely lit as they flew next to the road. These would prove to be our only Plain Swifts of the trip. Two Canary Islands Stonechats and a Laughing Dove were also notable flybys on our drive from the airport.

Once we arrived at our apartment we had a bit of trouble getting in, so decided to have a walk on the beach we it looked onto. A couple of Common Sandpipers were feeding among the rocks as well a Redshank and twos of Turnstone and Whimbrel. A Barbary Falcon gave a brief flyby, but unfortunately too fast for photos.

As we headed back to the apartment, we looked up to see a pair of Southern Grey Shrikes sat on the roof, while Spanish Sparrows were also obvious.

On our second day, we spent a really enjoyable eight hours at Barranco de Rio Cabras, seeing a great selection of birds around the water ad scrubby areas, although we did fail to find the Dwarf Bittern. Before we arrived, we also had a couple of Houbara Bustards by the FV-30 near La Oliva.

The water had attracted a few waders with ten Black-winged Stilts, a Snipe, Green Sandpiper and two Little Ringed Plover. Three Little Egrets and a Spoonbill were also on the grassy bank, and twelve Ruddy Shelduck included a brood of eight ducklings.

Birds around the scrub on the bottom and walls of the barranco included several pairs of Canary Island Stonechats, a party of four African Blue Tits, at least fifteen Trumpeter Finches, some Spectacled Warblers and good numbers of Berthelot's Pipits, Spanish Sparrows and Hoopoes. A few Laughing Doves were also flying around the barranco floor.

As we walked back to the car, eleven Egyptian Vultures were circling overhead with Yellow-legged Gulls and Common Buzzards, while a few Lesser Short-toed Larks were also singing from an area of low scrub. 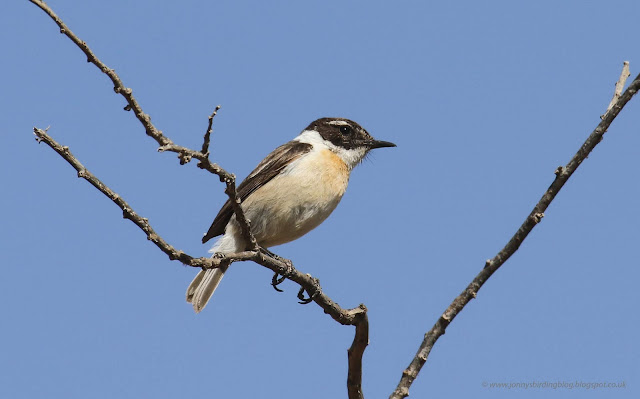 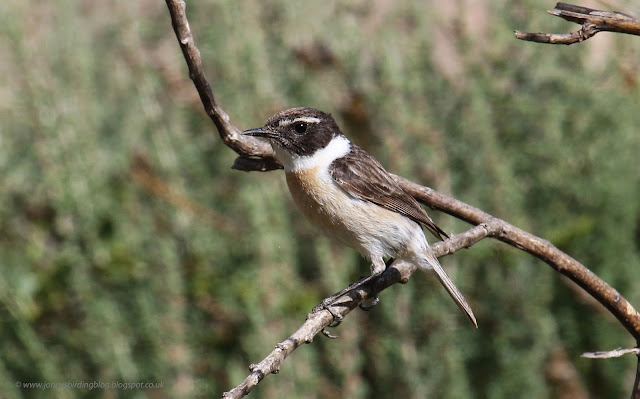 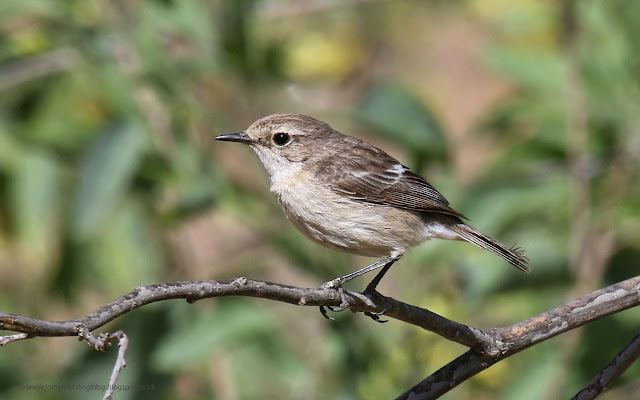 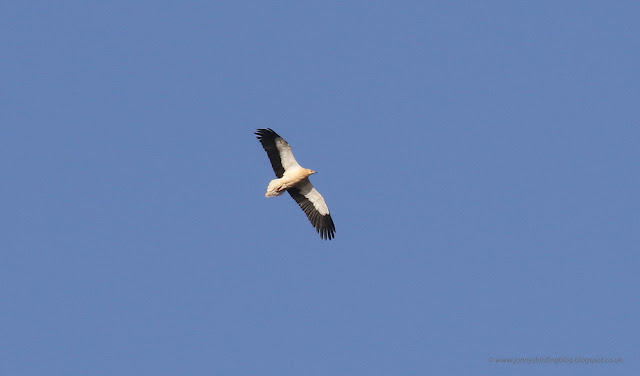 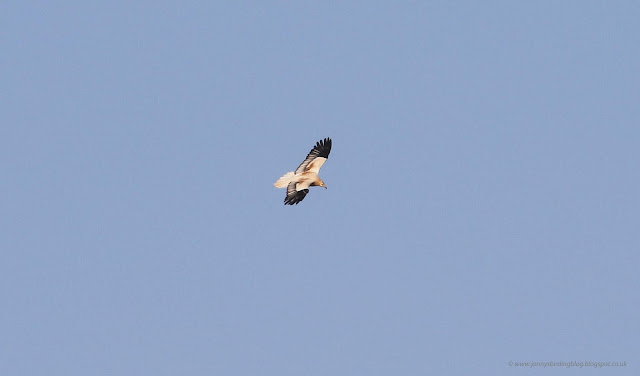