It was nice to see this Glossy Ibis at Cresswell this evening, even if it was playing a bit hard to get... 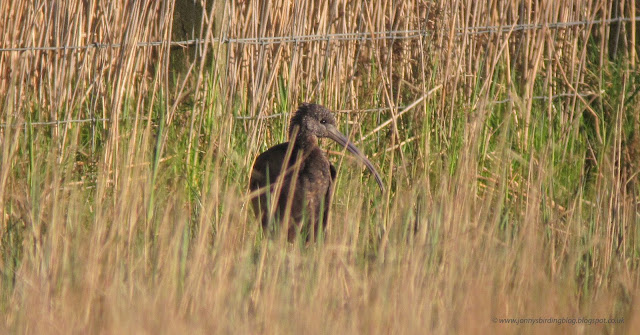 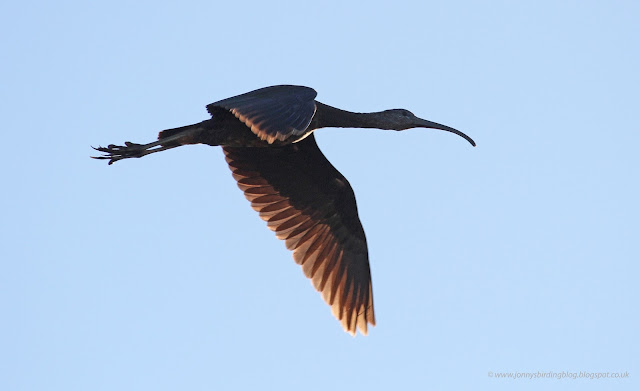 Back to the patch again this morning, and there were a few more new summer migrants for us...

The first was Swift with 8 over Chevington, while a Wheatear at Hemscott Hill was a patch year tick. The male Channel Wagtail was also showing well here with a single Yellow.

At Druridge Pools, the 2CY Spoonbill was behaving typically lazily, though did have a bit of a fly around as we were leaving. A pair of Garganey also remained here as well as 3 Ruff, 13 Black-tailed Godwits and a couple of Lesser Whitethroats by the track.

At Cresswell, 7 Wheatears were north of the causeway, with a couple of them showing really well. Another Yellow Wagtail was also here and 2 White Wagtails. 2 more Wheatears were at Snab Point too. 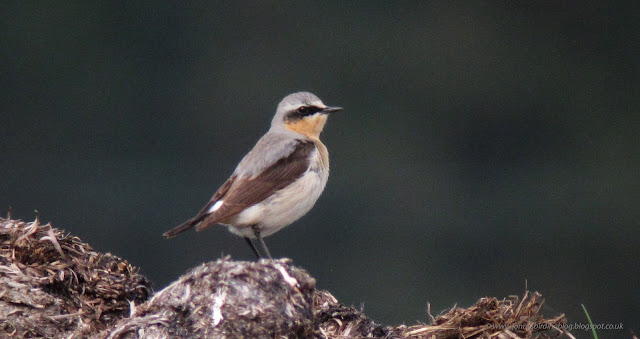 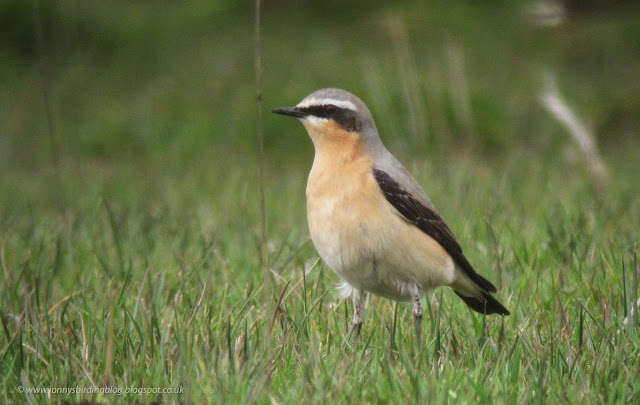 Our third day of our holiday was mine and my Dad's only designated full day birding of the trip, so we decided to head south-west and basically try and get as many lifers as possible...

Our first stop was the Asprokremmos Dam. Chukar was our first lifer of the day, and we saw around half a dozen birds around the site. However, our biggest target here was Cyprus Warbler, and eventually we found a pair up on one of the hillsides below the dam - difficult birds with the number of Sardinians around. As we were walking back to the car, a Spur-winged Plover appeared on one of the dried up pools and spared us a trip into Paphos. Other sightings here included our first flock of Purple Herons with 7 flying over the reservoir, an Alpine Swift, plenty of Crested Larks and a Red-throated Pipit.

From here, our next stop was Mandria. In the town itself we managed to track down a couple of singing male Laughing Doves, while the beach produced a Spur-winged Plover in flight and a flock of 20+ Short-toed Larks. We had just a short stay here as we were told about one of our most hoped for birds of the trip on nearby Timi Beach...

On arrival at the beach it didn't take long for us to get onto the stunning summer plumage Greater Sand Plover which was feeding among the stones. This bird looked great through the scope, even if the heat haze made photography difficult. The nearby cliffs had a pair of Isabelline Wheatears and a male Eastern Subalpine Warbler showed briefly in a field, along with a Whinchat. This was also probably the best site we visited for butterflies with at least six species including Swallowtails, Bath Whites and Mallow Skippers.

For our next stop we headed back inland to Anarita Park, where a group of 4 Lesser Kestrels were hunting over a hillside, as well as a Peregrine and 3 Tawny Pipits.

Finally, we made the short journey to Nata Ford. The most numerous birds here were Spanish Sparrows with huge numbers feeding in the vegetation and bathing in the small river; we estimated at least 100, with just one or two House Sparrows. Two Turtle Doves here were great to see and my first view on the ground for probably six of seven years, while a pair of Bonelli's Eagles over a nearby hillside looked impressive. The river by the ford held a few waders; Green Sandpiper, Little Ringed Plover and Snipe, as well as a few Black-headed Wagtails and a single smart 'Superciliaris' type Yellow Wagtail. 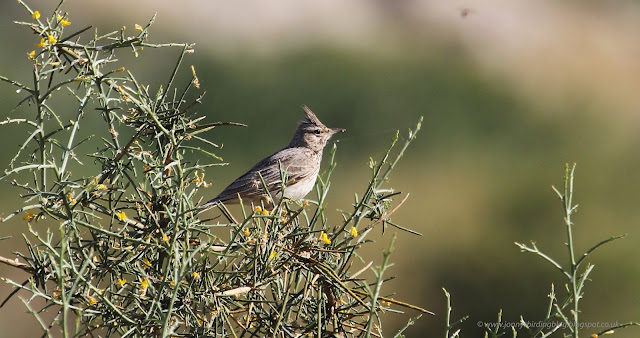 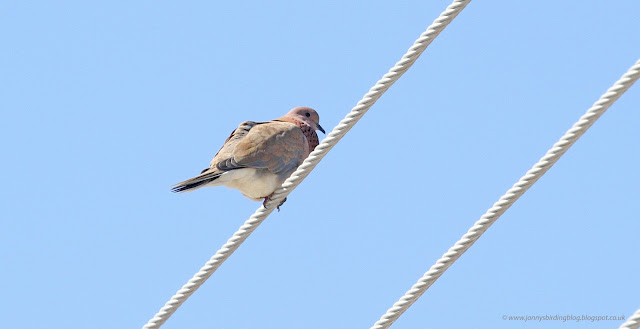 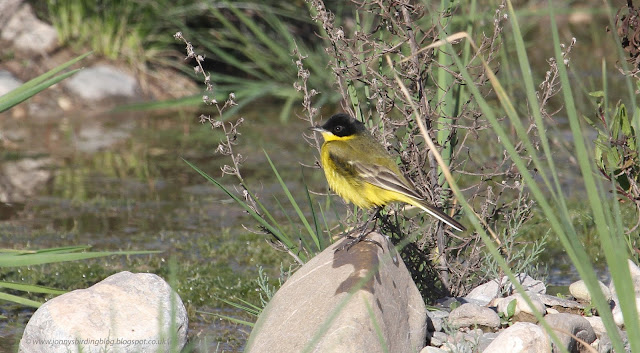 Spring on the patch...

Over the past week or so we've had several trips up to the patch to make the most of the actually quite nice weather, and it has definitely started to feel like spring has arrived...

Last Sunday saw an influx of Willow Warblers on the patch, while Sandwich Terns and Swallows were also new for the year. The Budge Fields were holding good numbers of waders with 7 Ruff, 50+ Black-tailed Godwit and a Whimbrel, while a drake Garganey also put in an appearance there. A Water Pipit was looking smart in almost full summer plumage.

Stopping at Cresswell provided us with our first Yellow Wagtails of the year, and it was a nice surprise to see one of them was a male 'Channel', and this one has been seen on and off in the bay since.

This weekend there has been a bit less variety, but a lot of the summer migrants are in, with our first Whitethroats, Reed, Sedge and Grasshopper Warblers and Common Terns. More unusual were the 3-4 Garganey at Druridge Pools (probably two drakes from the hides and a pair on the pools by the old coal road).

Cyprus - Birding around the villa...

After our morning of the second day at the Baths of Aphrodite, we spent the afternoon in and around our villa in Latchi, and the birding there was actually surprisingly good!

We'd noticed a scrubby area over the back fence and with a decent flock of sparrows we decided to check it out. One of the first birds we saw in the sparrow flock was a male Spanish Sparrow - a lifer we'd really hoped to get on the trip. We spent a while watching the group which in the end contained 5+ males and probably a similar number of females.

We moved to the next bushes and I saw a bird perched on the edge. Raising the bins we were pleased to see a female Masked Shrike, another new one for us. Other sightings in the area just over our back fence included a pair of Cyprus Wheatears, Sardinian Warblers, Fan-tailed Warblers, Crested Larks and a Hoopoe.

Later in the afternoon, a Black Francolin started calling from the field behind the villa, and we decided to check it out. We followed a small track up into the field and two Francolins were calling, one from just a few metres away, and despite the close range seemed impossible to get a view of. Eventually, my dad managed to pick it up in the field margin, although it quickly vanished again. He headed back inside, while I stayed on the track a bit longer. It reappeared and showed really well, without disappearing.

In the evening a steady passage of Swallows took place overhead, and a group of 40+ Red-rumped Swallows were great to see. 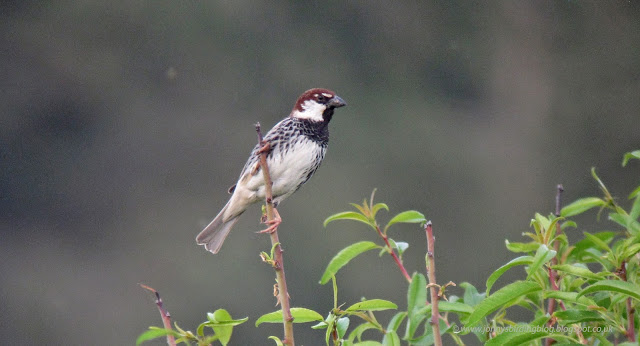 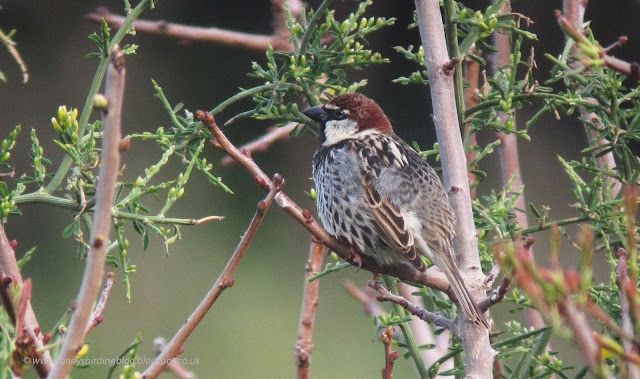 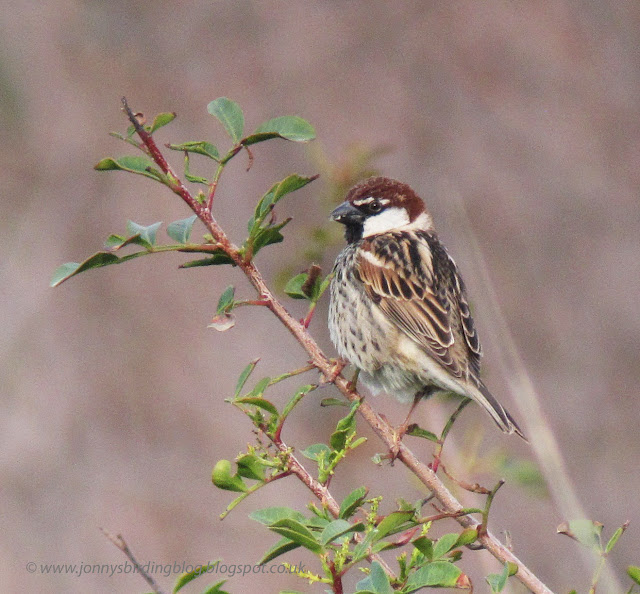 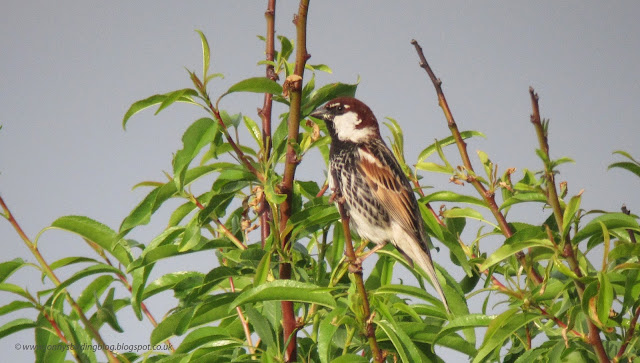 Cyprus - Baths of Aphrodite (part one)...

Last weekend we arrived back from a holiday in Cyprus, and I'm starting to be able to go through my photos from an awesome week. I'll probably do four or five blog posts over the next weeks detailing one or two days at a time...

The first one is about our first morning at the Baths of Aphrodite, not far from where we based ourselves in Latchi. My first lifer of the trip came almost immediately with an Eastern Olivaceous Warbler in the gully by the entrance to the caravan park. Also, we had become aware of the number of Blackcaps at the site - we estimated 50+ on this visit.

Moving along the dirt track, we had our first three of many Cyprus Wheatears, as well as a Northern sat up in a bush. The distinctive insect-like song of the male Cyprus Wheatear was a sound we would hear a lot during the week!

We also flushed a ringtail harrier, and with five primary 'fingers' and quite bulky features it was apparent that this was a female Hen Harrier. A phyllosc flitting around a bush proved to be an Eastern Bonelli's Warbler, and we got some stunning views in a clifftop bush at the east end of the caravan park.

When we reached this end, another ringtail harrier lifted off from the cliff side, and this time it was a female Pallid Harrier, providing a really good comparison to the earlier Hen. Walking back to the car park, a Wood Warbler was the best migrant we could find - in the trees above the 'bath', while a Long-legged Buzzard moved north over the ridge.

Back at the car park, a large group of hirundines had appeared, and comprised mainly Swallows, House Martins and Swifts, but also 5+ Red-rumped Swallows and our only Crag Martin of the trip. A great first morning birding!

The next blog post will be on the surprisingly good selection of birds around our villa in Latchi... 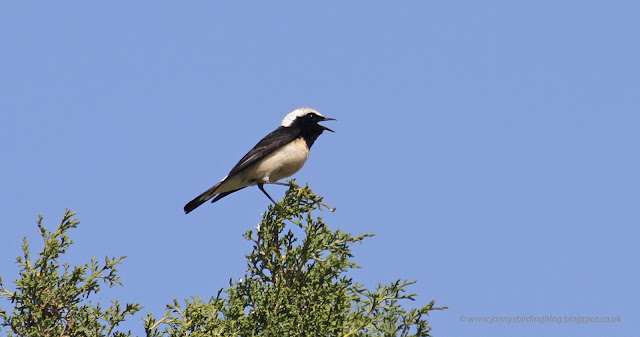 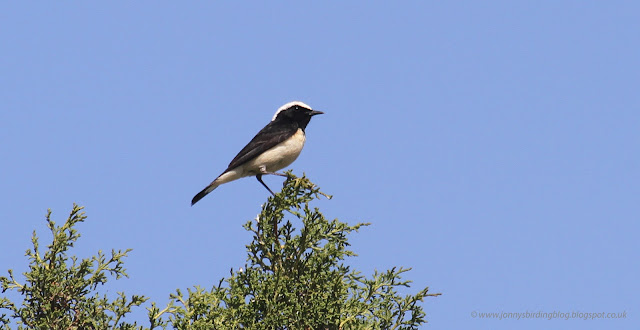 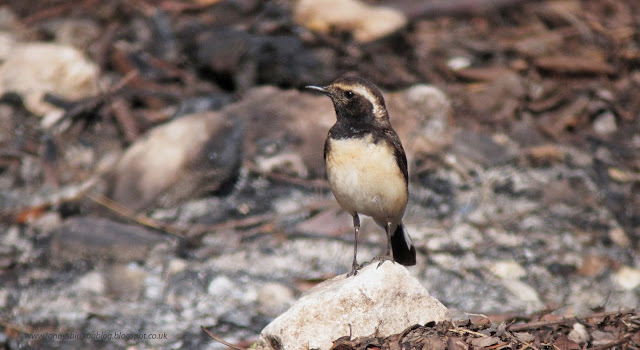 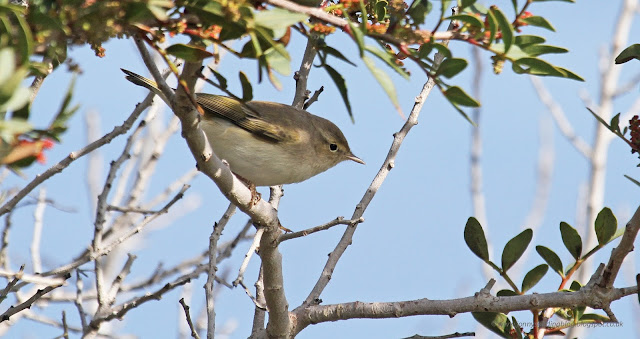 Yesterday we headed to Holy Island for our first day of migrant-hunting this year. After easterly wind and drizzle overnight, we hoped there would be a few early migrants such as Ring Ouzels, but it turned out to be a bit quiet, only picking up in the afternoon when 2 Black Redstarts were below the Vicar's Garden and a smart Great Grey Shrike was on the Snook - my first in spring. 3 Slavonian Grebes were also showing well offshore, with two starting their moult into summer plumage. Sadly, despite much searching, we were unable to locate the Black Scoter... 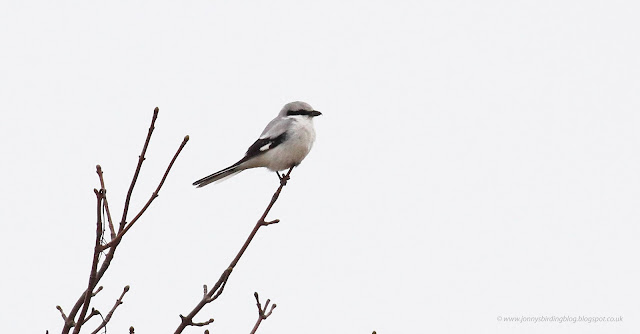